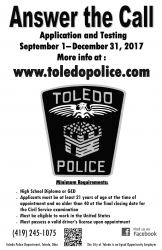 Enforces and upholds the Constitution of the United States, the State of Ohio and the Charter of the City of Toledo and faithfully, honestly and impartially discharges the duties of office according to law and the Police Division manual, rules, regulations, orders, policies and procedures; performs long periods of routine patrol while remaining prepared to react quickly to emergency situations and while being continually aware in discerning out-of –the-ordinary conditions or circumstances which indicate trouble or a crime-in-progress; drives a vehicle under normal and emergency situations; uses mature judgment in problem-solving in situations such as a family disturbance, a potential suicide, a crime or offense in progress, an accident, a disaster and other similar emergencies; provides temporary service as needs may arise, including direction of traffic and giving medical assistance; uses mature judgment in deciding when to make an arrest or to use necessary force as needed in any particular situation or emergency; performs intelligible and grammatically correct communication and recordkeeping functions including oral and written reports to be used by the department or in court; tolerates stress in situations where subjected to verbal or physical abuse, e.g., while making arrests, reacting to a disturbance, dealing with violent behavior; exhibits personal courage in the face of situations that may cause injury or death; skillfully questions suspected offenders, victims and witnesses of crime and exhibits a professional self-assured presence in taking charge of an emergency situation without unduly alienating participants or bystanders; maintains a balanced perspective in the face of constant exposure to the worst side of human nature; assists persons in difficulty or in need of information and refers them to the proper authorities; performs other general public contact and public relations work in many matters of a non-criminal nature; maintains evidence at the scenes of crime and testifies in court.